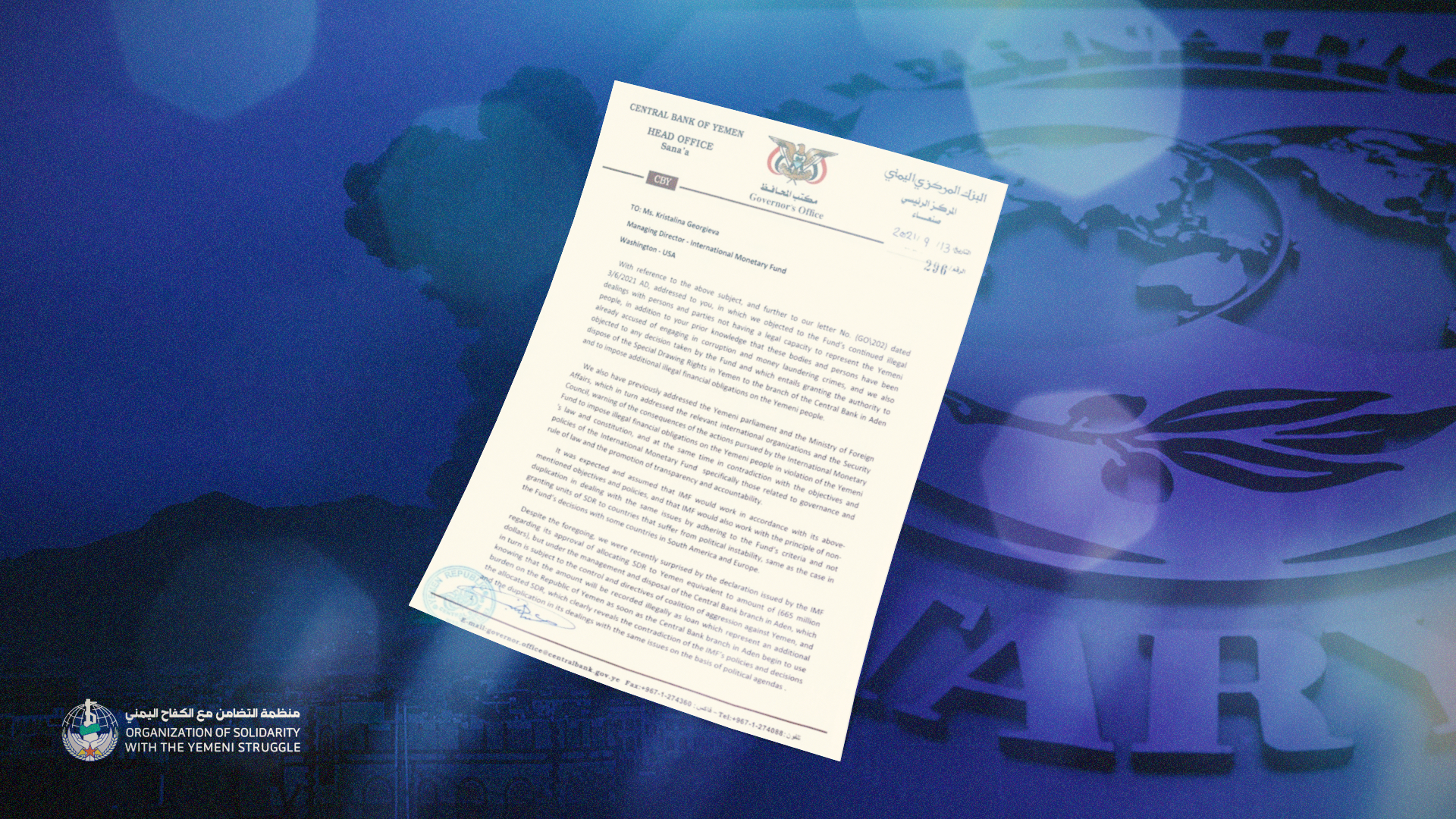 On the 13th of November 2021, the governor of Yemen’s Central Bank Head Office sent a written complaint to Kristalina Georgieva, the managing director of the International Monetary Fund.

Written in English and simultaneously published to the public on the internet, the letter levelled some of the heaviest critiques against the IMF, accusing the IMF of working in tandem with the aggressor states to exploit the Yemeni people and their resources.

The following is the original text of the letter by the Central Bank Governor, as it was sent to the IMF:

With reference to the above subject, and further to our letter No. (GO\202) dated 3/6/2021 AD, addressed to you, in which we objected to the Fund’s continued illegal dealings with persons and parties not having a legal capacity to represent the Yemeni people, in addition to your prior knowledge that these bodies and persons have been already accused of engaging in corruption and money laundering crimes, and we also objected to any decision taken by the Fund and which entails granting the authority to dispose of the Special Drawing Rights in Yemen to the branch of the Central Bank in Aden and to impose additional illegal financial obligations on the Yemeni people.

We have also previously addressed the Yemeni parliament and the Ministry of Foreign Affairs, which in turn addressed the relevant international organizations and the Security Council, warning of the consequences of the actions pursued by the International Monetary Fund to impose illegal financial obligations on the Yemeni people in violation of the Yemeni’s law and constitution, and at the same time in contradiction with the objectives and policies of the International Monetary Fund – specifically of those related to governance and rule of law and the promotion of transparency and accountability.

It was expected and assumed that IMF would work in accordance with its above-mentioned objectives and policies, and that IMF would also work with the principle of non-duplication in dealing with the same issues by adhering to the Fund’s criteria and not granting units of SDR to countries that suffer from political instability, same as the case in the Fund’s decisions with some countries in South America and Europe.

Despite the foregoing, we were recently surprised by the declaration issued by the IMF regarding its approval of allocating SDR to Yemen equivalent to amount of (665 million dollars), but under the management and disposal of the Central Bank branch in Aden, which in turn is subject to the control and directives of coalition of aggression against Yemen, and knowing that the amount will be recorded illegally as loan which represent an additional burden on the Republic of Yemen as soon as the Central Bank branch in Aden begin to use the allocated SDR, which clearly reveals the contradiction of the IMF’s policies and decisions and the duplication in its dealings with the same issues on the basis of political agendas.

“It is imperative that SDRs are used responsibly and wisely. It is important everywhere, but so critical for Lebanon, this is a precious resource and must be used and distributed for the maximum benefit of the country and its people, the Lebanese people have the right to know what the SDR in Lebanon will achieve for them. Also, the first areas in which action must be taken is to directly address the core problem related to weak governance, by strengthening the combat of corruption, improving the performance of country’s functions, and completing the audit of the accounts of the bank of Lebanon and the company involved in providing electricity supplies.”

Therefore, and in confirmation of what was included in the statement issued by the Central Bank of Yemen – Headquarters Sana’a – in this regard dated on August 29, 2021 AD, and based on the principles of neutralizing the Yemeni economy and to avoid using the allocated SDR as a tool to finance the war against Yemen, the Central Bank of Yemen calls on the International Monetary Fund to adopt one of the following demands:

In case the International Monetary Fund rejects any of the above-mentioned demands, the Central Bank of Yemen confirms its complete rejection of the Fund’s responsibility from any burdens that will result from the Fund’s decision, and that the Republic of Yemen and the Yemeni people retain their legal right to prosecute any party that works, facilitates, or contributes directly or indirectly to the exploitation of the rights and resources of the Yemeni people by people proven to be corrupt who contribute to finance the war on Yemen and fueling the conflict in it, and bringing people’s livelihood to the lowest levels, under the management and supervision of the coalition of aggression. The Central Bank of Yemen will also cut off all forms of cooperation and communication with the International Monetary Fund.

Below is attached all three pages of the original letter.